Tuina, the massage within the body

Tuina is a branch of Traditional Chinese Medicine (TCM). Its name means pressing (Tui) and grasping (Na). Following the same principles as TCM, Tuina is an ancient form of Chinese massage and musculoskeletal manipulation which involves restoring balance to the vital energy (Qi) in the body by using various massage techniques, and allowing the body to naturally heal itself. 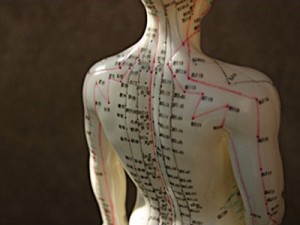 Tuina practitioners stimulate the client’s energy meridians and acupoints to normalize the flow of vital energy. Energy can be sluggish, depleted or excessive. As acupoints are related to the organs of the body, many internal diseases can be addressed through their stimulation.

Tuina therapy is a valuable complement to conventional therapy: it favors the restoration of health in case of pain, contracture, physical and mental tension, and many other ailments such as muscular or articular pain, anxiety and depressive disorders. Tuina therapy is an important application in what the Chinese texts define “diseases of emotions”, such as anxiety, insomnia, irritability, mental fatigue, depression, emotional instability. The psychological aspect is often an important issue in diseases like contractures and stiffness in muscles and joints, headaches, etc. As with other branches of TCM, Tuina is used not only to correct problems, but also as preventive treatment. 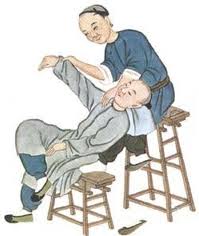 As it is practiced in China today it can be compared more to the work of chiropractors and physical therapists than that of a massage therapists. It is taught as a separate but equal field of study at the univerisities of Traditional Chinese Medicine, requiring the same level of training as acupuncturists and herbalists. In the West, it has been modified to become more of a therapeutic extension of traditional western massage methods, even if emphasis is still on restoring and balancing energy, and on addressing specific physical conditions. Most western trained Tuina practitioners, including me, do not practice bone setting, as their counterparts in China do.

Tuina can be used with elderly and infants. Regarding infants, there is a specific branch of pediatric tuina (acupounts in babies have a different location). There is also another branch of Tuina in which the practitioner uses only his or her feet to perform a massage. The major focus of application is upon specific pain sites, acupressure points, energy meridians, muscles and joints. The client usually feels relaxed during the treatment and energized after it.

Differences between tuina and western massage. Compared to western relaxing massage, tuina tends to be more task focused in that it is used to treat a specific area and not the whole body. However, it also have a relaxing effect.